What comes to mind when you think about the onset of spring? Flowers and gardens? Outdoor insects waking up to “bug” you? Easter? Spring cleaning? Each category requires special considerations when it comes to pet safety. Read about Tom the cat, one of our patients at Walnut Creek Vet Hospital, as he shares his first springtime experiences.

Tom was 9 months old when he experienced his first spring in Texas. Tom is a mostly indoor cat, with only brief forays into the back yard under his owner’s supervision, but he still managed to experience many seasonal dangers.

One morning, Tom jumped up onto a table in front of a living room window. The warm sun shone on and off from behind the white, puffy clouds, and Tom couldn’t help staring at the beautiful blooming flowers, the busy pollinators, and the singing birds. When his owner walked toward the back door, Tom ran after him,  rubbed his legs lovingly, and sat at the door, asking to go outside. The door opened, and out they went.

Tom enjoyed wandering around the yard and garden. Unfortunately, however, the garden had recently been sprayed with insecticide that was toxic to pets, and Tom soon began drooling and vomiting, with diarrhea. Fortunately, Tom was exposed to an insecticide that caused only mild symptoms, because some insecticides can be life-threatening. Still, his owner realized he was in trouble, and immediately brought him to our hospital, where he recovered after treatment. Tom never got as far as the garden plants, many of which can be toxic for pets.

Pets in spring: Problems with fleas and ticks

Tom was kept inside thereafter, but that didn’t end his outdoor adventures. As the temperatures warmed, and insects became more prevalent, some fleas accidentally got inside the house when eggs hitched a ride on Tom’s owner’s sneakers. Overnight, Tom became so itchy that he licked a bald spot right above his tail. When he was finally brought back to our hospital, he was infested with fleas, plus a tick. Our team educated Tom’s owner on how to avoid fleas and ticks, and that Tom needed feline-specific flea and tick preventives, despite being an indoor-only cat.

We also explained that although heartworm disease is less prevalent in cats than dogs, cats can still be bitten by mosquitos, and infected with heartworms, and may develop significant lung disease, and we strongly recommended year-round heartworm prevention for Tom.

When Tom’s owners found out that Tom’s fleas would have produced flea eggs that were likely still in their home, spring cleaning became their top priority, and they got to work scrubbing surfaces and floors, dusting, and vacuuming. Tom was curious about all the activity and wanted to be involved, so he walked into their midst as they were on all fours cleaning the floor, settled down in a sunspot, and began grooming himself.

Tom didn’t realize that the floor was being cleaned with bleach. His toes and mouth started to tingle, his paws became irritated, and his mouth and tongue had some minor ulceration. Once again, Tom needed medical treatment, and our hospital team suggested some pet-friendly cleaning products his owners should use in the future.

(A couple of years later, we again treated Tom when he had his first asthma attack, caused by dust from his owners’ spring cleaning, and again we recommended pet-safe products.)

Pets and spring: Easter lilies are not so beautiful 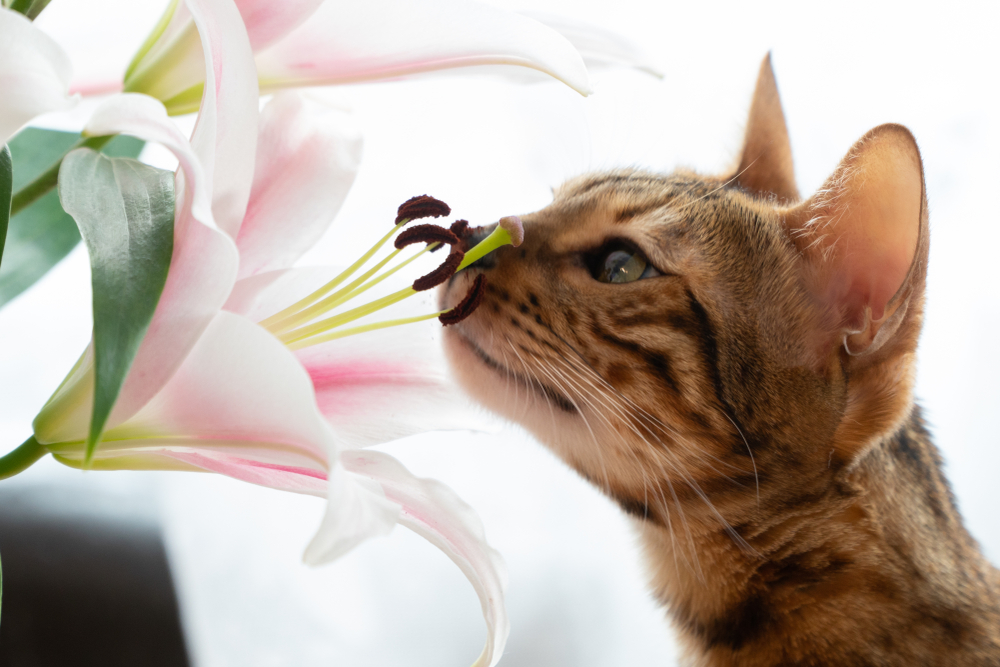 Fortunately, Tom was feeling much better by Easter, which was an important household holiday, and the whole family was there. One family member brought a gift of an Easter lily, which was too tempting for Tom. “Oh, to be able to rub my face on that beautiful flower,” he thought. And he did.

Unfortunately, every part of the lily plant is toxic to cats—the flowers, leaves, or pollen can be ingested, or absorbed through the cat’s skin, and the water in the lily vase can cause fast, severe kidney failure. Lilies can kill between 50% and 100% of exposed cats, depending on how quickly they receive treatment.

Tom’s saving grace was that a family relative, who arrived late to the gathering, noted the lily plant on the kitchen counter, and saw Tom sitting a foot away, washing his face with his paw—so, another emergency trip to his veterinarian, immediate treatment for lily toxication, and hospitalization. If Tom had not been taken to his veterinarian so quickly, before he became ill, he likely would not be alive today.

As we were there for Tom, our team is here to help you and your pets when you need us. We love your pets like our own, and have dedicated our professional lives to caring for them with the highest standards of medicine possible.

As the seasons, and their pet hazards, change, the Walnut Hill team is here to discuss your concerns, recommend products—such as alternatives to Easter lilies on No Lilies for Kitties—and ensure your pet stays safe. Contact us, and schedule an appointment before spring sets in.